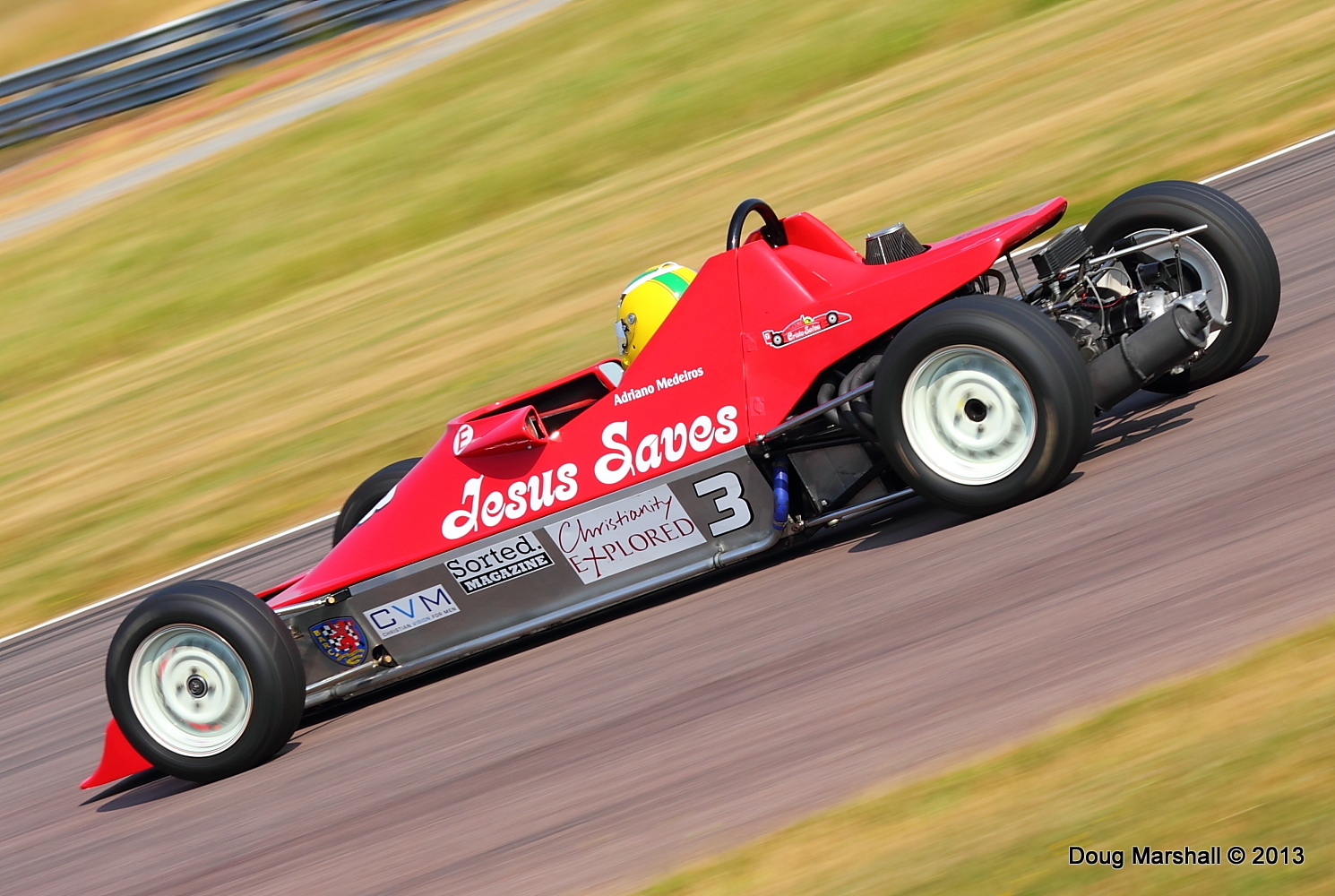 If you were to ask the average trainee minister what they did in their spare time, they would probably reply by asking “what spare time?”

But Alvin Davies, currently studying for a research Masters at the Anglican St John’s College in Durham after training for the ministry at Wycliffe Hall, the evangelical Anglican theological college in Oxford, has a very unusual answer: in his spare time he manages a successful motor racing team as part of a major evangelistic initiative headed by the former Formula One driver Alex Ribeiro.

Ribeiro, the former head of Atletas de Cristo, or Athletes for Christ, the Brazilian equivalent of Christians in Sport, is heavily involved in sports ministry, including having spent 25 years as the chaplain to Brazil’s national soccer team. But his own sporting prowess is in motor racing, which he began in 1967. And, alongside the usual collection of banks, cigarette brands and perfume companies, he would always put the words “Jesus Saves” or the Portuguese equivalent, “Cristo Salva” on the side of his cars.

In the 1970s Alex came to England and progressed through Formula Three and Formula Two before joining the March Formula One team in 1977, competing in some of the fastest motor races in the world. His car, emblazoned with the phrase “Jesus Saves” was seen in millions of homes across the world as a result of Formula One’s huge global tv following.

In 1978 he switched to Formula Two as an independent driver, under the adopted team name Jesus Saves Racing, with the words “Jesus Saves” in his car’s main sponsor’s spot, before moving back to Formula One in 1979 with Emerson Fittipaldi. But he wasn’t a success and he returned home to Brazil where he took on the leadership of Atletas de Cristo and the chaplaincy of the Brazilian national football team.

“I approached Alex about a year and a half ago,” Alvin Davies said. “I just wrote to him and said have you ever thought about re-starting Jesus Saves Racing for the Gospel, for evangelism. Not to specifically support any one driver to try to get to F1 or anything, but to use it as an evangelistic tool. 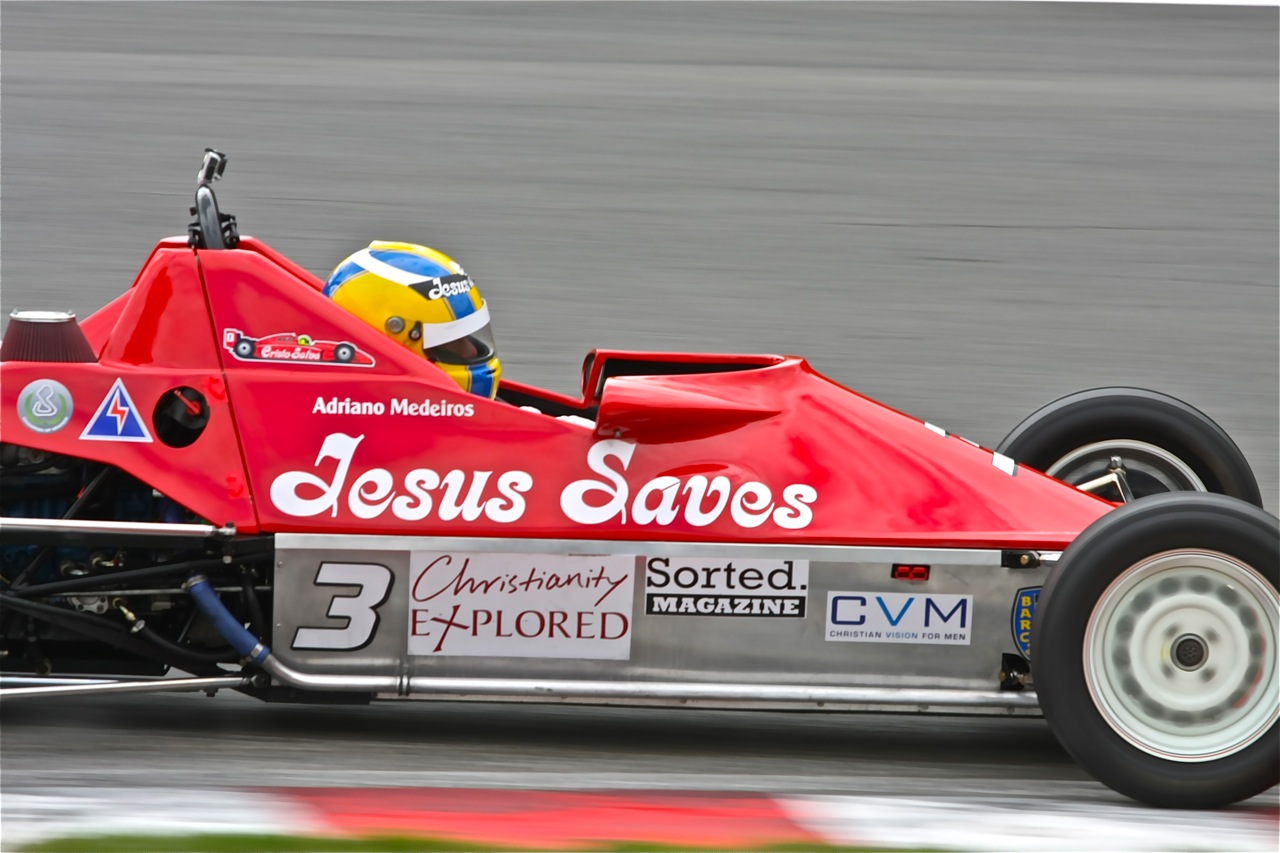 Sponsored by evangelism course Christianity Explored, the mission agency Christian Vision for Men, and the Christian men’s magazine Sorted, the Jesus Saves Racing team entered a car in the British Classic Formula Ford championship – and won the 2013 title with driver Adriano Medeiros. “Adriano became a Christian through Alex and Jesus Saves in Brazil,” Davies said. “He went and asked Alex for some money and Alex pretty much said ‘I haven’t got any money for you but I need to tell you about Jesus Christ.’ He said: ‘I’m listening’.

“So for Adriano it has become a bit of a journey: to become a Christian through Jesus Saves in Brazil and now to race the car this year as a professional working race driver and to win the Classic Formula Ford championship this year has been quite amazing for him.”

Despite their success on the race track, the Jesus Saves Racing team are focusing their attention on developing their activities off the track. In addition to placing the Jesus Saves logo on the car, the group works with churches and men’s groups to invite non-Christians to the race track and provide hospitality as a platform for evangelism.

“It varies a lot, actually, for the last couple of races we have had a lot of people, probably up to about 50 or 60 people at the track who come and spend a day with us and bring a non-Christian friend. They see that Christians do normal sporting things that we’re good at it,” Davies said.

“We spend the day with them, we tell them a bit about Alex, what he started and why he did it and bring that to Jesus’ story and his testimony, as well as Adriano’s testimony.”

The Revd Colin Jee served as chaplain to Jesus Saves Racing in the 1970’s. Today, the role has gone to his son-in-law, the Revd Andy Rimmer, who is vicar of The Lantern Anglican church in Canford Magna Team Ministry in Wimborne, Dorset. Rimmer is also the chaplain to Football League Championship side AFC Bournemouth and served as a chaplain to the 2012 London Olympics.

The Jesus Saves Racing team isn’t precious about protecting its logo and are happy for other Christian racing drivers to spread the message. “Alex had a Brazilian lad come over called Felipe Guimaraes, who has just competed in British Formula Three. He normally races with “Jesus Loves You” on the car in Brazil but I asked him to put Jesus Saves because people remember it here and I think it’s a stronger message for Europe,” Davies said. “He put Jesus Saves on his car and won two races: one at Nürburgring and one at Brands Hatch. He finished fourth in the title and it looks like he is leading the Brazilian Formula Three championship as well.

“We’ve also got a guy called Gary Thomas who’s just won the British Sprint Championship [1100cc – 1600cc] in a car with Jesus Saves on as well. He’s done that of his own back because he likes what we’ve been doing.”

In addition to evangelism through race-day hospitality, the team behind Jesus Saves Racing have found themselves acting as informal chaplains to the racing fraternity. “When you get alongside people one-to-one they’ll start asking things: asking you why you’re doing what you’re doing and asking about Christianity,” Davies said. “They’ll do all that individually but in a group they’ll still be all blokes down the pub, kind-of-thing. People want to talk to us; they confide in us as if we’re the vicar or something, so that’s been interesting.”

Motor-racing fans who recognise the Jesus Saves logo from the 1970s have taken to team. Alvin Davies said that it provides an historic kudos at a time when there is growing interest in the retro side of the sport.

Despite the positive reaction from those associated with motor racing, some Christians have reacted badly to the message. “There are some that just love what we do and want to get involved and there are others that say ‘woah, that’s full on'”, Davies said. “I think they forget that if we really truly live in what is a post-Christian society, then ‘Jesus Saves’ doesn’t mean much to somebody out there; but they will know that you’re religious.

“We don’t get any problem with non-Christians. They find it fascinating. They linger and look at the car; but sometimes Christians will say that the message is too bold. They know what the message means to them and they know the full implication of that so they see it through that not realising that it doesn’t mean that much to a non-Christian without explanation.”

Now the 2013 season is over, the Jesus Saves Racing team is preparing for next year. Their focus is to build the evangelism side of their work and develop links with churches. But on the track-side, there is the possibility of having three drivers each with their own car in 2014; including an up-and-coming driver from Brazil; but Alvin Davies insists that it is “too early to talk about” what next year has in store.