A SENIOR lawyer has been instructed by the Evangelical Alliance to investigate claims that a best-selling author and evangelist fabricated his remarkable life-story.

Tony Anthony and trustees from his Essex-based global evangelism charity Avanti Ministries gave evidence to the inquiry, which was launched after it was revealed that his autobiography, on which the charity is based, is built on fantasy and plagiarism.

Tony Anthony’s “Taming the Tiger”, distributed in the UK through the Christian publisher Authentic Media, has sold more than 1.5 million copies in 25 countries. On the back of it, Anthony travels the world preaching the gospel in prisons, schools and churches as far away as Asia, South Africa and South America.

In the book, Tony Anthony says he was raised in China by his grandfather, a Kung-Fu grand master, at the age of four. He was trained in the martial arts and became Kung Fu world champion three times. He then moved to Cyprus, becoming an elite bodyguard to businessmen, gangsters and diplomats before being jailed in Nicosia Central Prison for a series of thefts from hotels. It was in prison that Tony Anthony says he became a Christian.

Questions were asked about the authenticity of Taming the Tiger ever since it was first published in 2004. Critics were quick to point out that it reads like a work of fiction; and now an intensive investigation by a group of church leaders suggests that it is just that.

The investigation began after Mike Hancock resigned from his post as a director of Avanti Ministries Ltd, the charitable company set up by Anthony to support his work. Hancock had asked for proof of Tony Anthony’s claims but was met with evasion. “I understood that I had a moral and ethical responsibility to ensure that his story could be thoroughly verified. I was unable to persuade my fellow directors of the need to do this. I therefore resigned from Avanti and pursued the search for truth with other like-minded Christians,” he said.

He, together with another former director and a small informal group of concerned church leaders, set about investigating Tony Anthony’s background. Their findings were presented to the trustees of Avanti, the Evangelical Alliance and Anthony’s publisher, Authentic Media.

As a result of the evidence obtained by the church leaders, the Evangelical Alliance launched a formal inquiry which is due to report any time now.

The informal investigators began by rebutting claims made by Anthony in his book.

One of the long-standing objections raised about Tony Anthony’s story is that there is no record, anywhere, to support claims that he won any Kung Fu competition; let alone that he was three-times world champion. Anthony attempts to deal with this criticism on his website, saying: “The competitions that Tony Anthony took part in are over 200 years old – and they are derived from the lineage of ‘Gong So’ who goes back to the Manchu Dynasty. These competitions are held in mainland China and as they are so specialised Tony Anthony have not known them to be publicised outside of the relevant circles, which is another reason why Tony Anthony doubt very much that you would ever find these competitions advertised on a Google search engine.”

But scrutiny of the book’s text reveals that many of the passages detailing Kung Fu techniques were copied, wholesale, from a specialist martial arts website. One passage is lifted from a book about Bruce Lee.

The investigators went further: Tony Anthony claims to have worked as an elite bodyguard to “a number of wealthy jet-setting clients” before becoming “first hand man” and close protection officer to the Saudi Arabian Ambassador to London, Amin Fahed. But there is no record of any Saudi Arabian diplomat called Amin Fahed. The Saudi ambassador to London at the time was Sheikh Nasser Almanqour.

Tony Anthony has long-blamed the discrepancies on “western naivety” for not understanding that some details would be changed because of the “underworld and criminal nature” of his pre-conversion activities.

But he has not explained how he could have been leading five-man security teams, checking hotel rooms for IEDs, engaging in James Bond-style high-speed gun-toting chases through the streets of Riyadh and using Kung Fu kicks to overpower armed kidnappers in Switzerland; when he could only have been aged between 13 or 14 and 16 or 17; dependent upon which version of the book is used.

Having ascertained his true identity the investigators discovered that Tony Anthony could not have been taken to China by his Kung Fu grandfather when he was four: Anthony’s grandfather was a laundry worker in Cardiff who later owned a café in Streatham. He died seven years before Anthony was born.

Anthony also claims in his book that his father was Italian. In fact he was Cypriot who anglicised the family name from Athanasiou to Anthony. 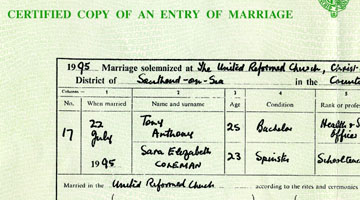 Tony Anthony’s deception isn’t restricted to his book. When he married his wife Sara in Rayleigh United Reformed Church, Southend, in 1995, he claimed he was 25 years old; but he was actually just 23.

He used his correct date of birth on official records when he registered Avanti Ministries Ltd in 2003; but two years later he submitted a change of details form to Companies House amending his birth year to 1969.

A spokesman for Companies House said they would assume the change was to correct a previous mistake, saying: “We accept all documents in good faith and would not actively pursue them to confirm it was correct information.”

The investigators sent their findings to Anthony’s publishers. In the US, Baker Publishing dropped plans to publish a re-telling of Anthony’s story, saying: “We do not plan to publish Burning Tiger at this time. The reasons for that decision are between the publisher and author.”

Anthony’s UK publisher, the ironically named Authentic Media, said it was “working with the author and alongside his ministry Avanti and the Evangelical Alliance to look into the claims of the book and establish their truth.” Managing director Steve Mitchell said he said he could not comment further while they were “in the middle of a process.”

Speaking today, Steve Mitchell confirmed that the Evangelical Alliance Inquiry was due to report by the end of June; but that he had not seen its findings: “Authentic is not a recipient of the report and hasn’t seen a copy, we have requested feedback from the author and are waiting for a response.”

Taming the Tiger was still available to purchase on Authentic’s website this evening several months after the company was told of the results of the investigation.

In public presentations, Tony Anthony continues to claim he was raised in China by his grandfather, despite admitting in response to the informal investigation that he was raised by “a distant relative” as part of a “complex family arrangement”.

Tony Anthony pulled out of an interview in March, requesting instead that questions were put to him in writing. In response, he declined to say why he used a fraudulent date of birth when he got married or why he changed his date of birth with Companies House.

He confirmed only that an inquiry had been launched, adding: “currently it is at its very early stages, and is yet to be completely formalised, so we are unable to provide any additional details at this time. When available, further detailed information will be placed in the public domain.”

Geoff Elliott, the other former Avanti trustee who took part in the church leaders’ investigation, said: “Tony Anthony’s reaction and response to a well-intentioned and sensible suggestion about how directors of Avanti could validate his testimony without allowing confidential and personal information to be made public strengthened my conviction that something was not right.

“I am sad at the extent of the deception and that this has impacted many people over the last 10 years; and concerned that when the truth comes out, as it undoubtedly will, this lack of truthfulness will damage the faith of those people who have been led to faith by Tony and his testimony.”

Mike Hancock, commented: “Many have received the dramatic elements of Tony’s testimony in good faith believing that it must have been verified as true. They have a right to know that it has never been verified. The evidence that has been uncovered does not verify his story.”

Another member of the investigation team, the Revd Carl Chambers, leader of Christ Church in Brighton, said: “I am deeply saddened that Tony should have been able to continue for so long in his deceit. I firmly believe that Jesus Christ rose from the dead – that is the truth. It is hypocritical for an evangelist therefore to fabricate stories about himself whilst proclaiming the truth.”

And David Buick, a French-based prison chaplain, who also took part in the investigation said: “I became concerned that somebody speaking in schools and prisons worldwide about their transformed life could be making much of their story up, and decided to find out more. For followers of Jesus, love and truth are supposed to go hand in hand. Checking out fantastic claims is a vital part of genuine faith, and our findings show how important it is that we do just that.”

“A devious and manipulative man” – judge

In Taming the Tiger, Tony Anthony explains that, a few years after returning to the UK, he was sentenced to 15-months in prison for a hit-and-run incident in which a woman motorcyclist was killed; and for harassment after a heated phone call to a Greek restaurant.

In the book’s version of the accident, Anthony says that he thought he had hit a “small deer or fox” that had “limped back into the undergrowth” because he had stopped his car and couldn’t see anything on the road.

He says that when he was questioned by police, “We couldn’t tell our story fast enough. No more lies. We were both desperate to spill out details of the dreadful accident. I couldn’t care less about the interrogation. I wanted to die. All I could think about was the woman I had killed.”

But news reports of the police investigation, inquest and trial reveal a very different picture. The woman who died was Elizabeth Bracewell, a 39-year-old girl-guide helper, and sister of the former Everton, Newcastle, Fulham and England footballer Paul Bracewell.

She was discovered in plain view in the middle of the road by a motorist who saw Anthony’s car speed off. And far from admitting the story, Tony Anthony and his wife Sarah told a series of lies and pleaded not guilty when they first appeared in court.

They were both sentenced for perverting the course of justice. The judge, Mr Recorder Stevenson, described Tony Anthony as a “devious and manipulative man” who had “deliberately embroidered his story” to throw police off the scent.

“You created a dishonest and false story. . . You set to cover-up your involvement. It seems to me you wriggled and wriggled as long as you could to try and rid yourself of this offence until you could do so no further.”

And rather than the single heated phone conversation with a Greek restaurant that’s detailed in the book, the court heard that Tony Anthony had made a series of abusive and racist phone calls to a former employer and to restaurant owners in Epsom, Surrey, and London. 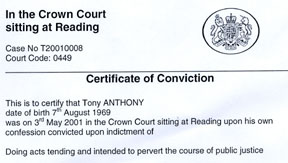 The most surprising aspect of the court case is that Tony Anthony was convicted using a false date of birth.

A certificate of conviction released by Reading Crown Court shows his date of birth as 7th August 1969 rather than the true date of birth, 30th July 1971.

Update (12 July 2013): The Evangelical Alliance and Avanti Ministries issued a joint statement late last night confirming that Tony Anthony’s story is false and that Avanti are withdrawing support for Taming the Tiger.

You can read it here

← Archbishop of Canterbury on the UK’s sexual revolution