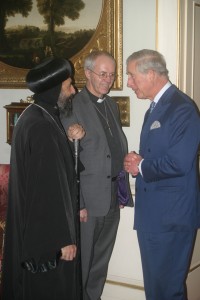 The Prince of Wales talks about the plight of Christians in the Middle East with Bishop Angaelos, General Bishop of the Coptic Orthodox Church in the UK; and the Archbishop of Canterbury, the Most Revd Justin Welby; during a reception at Clarence House, in December last year.

THE Prince of Wales has issued a strong condemnation of the so-called Islamic State (IS) and suggested that more should be done to assist those fleeing the violence.

Speaking to members of the Iraqi Chaldean church in London this morning, Prince Charles asked whether there was “a duty of care towards the victims of violence and their families who, like you, are daily distraught by the graphic transmission of violent images of their loved ones?”

While not mentioning IS by name, the Prince did unequivocal in his attack: “as these truly dreadful images of executions and beheadings are transmitted around the world via the Internet,” he said, “I cannot help but feel that we are in serious danger, in this so-called modern age, of descending into the dark ages of public executions.”

He said that as a person who had “appealed for greater understanding between people of faith [and] for greater tolerance and for harmony between the great religions of the world” that it was “utterly inconceivable that a person of one faith could find it in themselves to persecute a person of another faith.

“Surely to do so brings nothing but dishonour on the faith of the persecutor?”

He continued: “It seems to me that all faiths to some extent shine a light on the divine image in every human life.

“If that is so, then surely to destroy another human being is to desecrate the image of the Divine, and to do so in the name of faith is nothing less than a blasphemy.”

Prince Charles has spoken out against the persecution of Christians in the Middle East with increasing frequency.

And in a video for the charity Aid to the Church in Need, he said “It is an indescribable tragedy that Christianity is now under such threat in the Middle East – an area where Christians have lived for 2,000 years, and across which Islam spread in 700AD, with people of different faiths living together peaceably for centuries.”

Last year, after visiting the Coptic Orthodox Cathedral of St George’s in Stevenage; and St Thomas’s Syriac Cathedral in Acton, he told a reception in Clarence House that “we cannot ignore the fact that Christians in the Middle East are, increasingly, being deliberately targeted by fundamentalist Islamist militants. Christianity was, literally, born in the Middle East, and we must not forget our Middle Eastern brothers and sisters in Christ.”

Speaking this morning to Iraqi Chaldean Christians at the Roman Catholic Church of the Holy Family in Acton, he said that he felt “extraordinarily inadequate in trying to express how much I feel for what all of you are forced to go through”

He said: “The fact that your community has been in Iraq, practicing for your faith, for all these hundreds of years, and the fact that now that very faith which has been there for so long is under threat of complete removal is beyond all belief.”

He continued: “I have been deeply distressed by the horrific scenes of violence and persecution coming out of your beloved Iraq. I know that many of those who have been killed or forced to flee are members of your own families. . . The pain and grief for you must be quite unimaginable as you see them persecuted because of their faith. . .

“We hear much at present about ‘the duty of care’. Then, Ladies and Gentlemen, I am bound to ask, whether there is not a duty of care towards the victims of violence and their families who, like you, are daily distraught by the graphic transmission of violent images of their loved ones?

“But to you, Ladies and Gentlemen, whose brothers and sisters are suffering at this terrible time, to you whose families have lived, as I was saying, in the biblical lands since biblical times, I can only say from my heart that I thank God for your astonishing courage, faithfulness and perseverance.”